Ten years ago I flew over the Atrato River Delta from Medellín to Capurganá, a small coastal town in the vicinity to the Colombia-Panama border on the Caribbean coast. After nearly one hour of flight over the deforested mountains in the the northern Andes, the cloudy sky suddenly opened and the magnificent coastal plain of the Urabá Gulf appeared before my eyes. It was a flatland with a patchwork-like landscape where banana croplands, pasturelands, lowland rainforests, and meandering rivers intertwined while running northwards from the Andean foothills. Minutes later, the small aircraft reached the southern coast, and it was evident the proximity of the Serranía del Darién to the West, marking the limit between Colombia and Panama. As the plane flew over the U-like gulf, the bearing was slightly changed to the West. Soon after, the scene in-front of us was completely different. Tight forests extended from the hills to the coast. The view was the same as far as I could see. The Serranía del Darién turned far to the West and a extensive plain was now covered with flood-plain forests and freshwater grasslands, dissected by the various wide-courses of the Atrato River. The coastal margin was lined by a continuous forest consisting of tall mangroves with huge roots that emerged above the sea level. They seemed to me as giants standing on the coastline protecting the marshes and palm forests behind them. 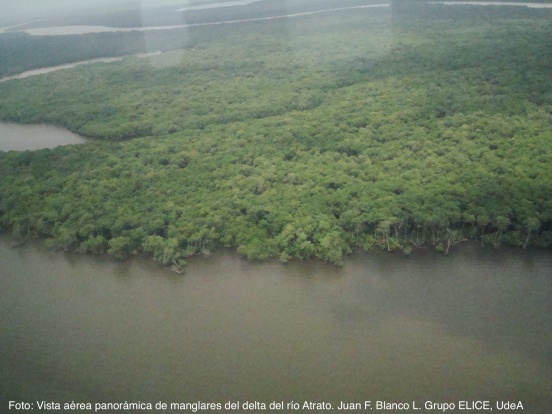 I was enjoying a view that I had only witnessed flying over the lowland rainforests in the Pacific coast of Colombia, also known as the Chocó Biogeographic Region, one of world’s biodiversity hotspots. Suddenly, the turbulence outside reminded me that I was onboard of a 12-passenger aircraft, and that a crash on the wetlands below us was a likely. Fortunately, the calm weather returned. Nonetheless, I imagined on the possibility of crashing on such wild area and on my chances of getting out there with no signs of human settlements in kilometers around.

The Atrato River springs out in the Western Cordillera of Colombia in the State of Chocó, one of the world’s rainiest areas with average annual rate exceeding 6000 mm. Therefore, the Atrato River is a Pacific Basin river discharging its waters into the Caribbean Basin. As a consequence, the main channel diverts into various branches in the coastal plain forming a bird-foot like delta. It sustains the extensive freshwater wetlands, lagoons (locally known as «ciénagas»), and the tall mangroves. Mangroves line along nearly 100 km of coastline, and extend over 3800 hectares. Red mangrove trees dominate over other species, and they usually reach more than 10 m in height.

My trips to the Atrato River Delta became frequent after that first trip. In 2009, I started mapping these mangroves using high-resolution aerial photographs as part of a multi-disciplinary biogeographic expedition along the Urabá Gulf. Afterwards, I collaborated with the environmental authority for zoning mangroves according to their conservation status. More recently, I partnered with fellow researchers from social, life and fisheries sciences, and with local fishermen to understand the role of these mangroves for folk fisheries.

The scientific knowledge, expeditions and long conversations with local fishermen have served to confirm that the Atrato River Delta mangroves are the last wild lands in the Urabá Gulf. They are not only extensive, they are huge carbon reservoirs, they are habitats for beautiful marine and terrestrial birds, sea otters, dolphins and crocs… they are nursery areas, refuge and habitat for almost one hundred species of fishes, shrimps and crabs.

Therefore, these wildlands sustain hundreds of coastal livelihoods. They are African-American descendants of emancipated slaves that escaped to the Pacific coast jungles from sugar cane states and mining enterprises stablished during the colonial period. After a couple of centuries of freedom and migration, they arrived to the coast of the Urabá Gulf down to the Atrato River. More recently, these communities expanded due to the arrival of migrants from upriver as a consequence of the armed conflict. But still these human settlements are just pin-points within the dense forest matrix. Nature rules. I have traveled extensively across the Caribbean region of Colombia and a few countries of the Caribbean…but never seen mangroves such as those in the Atrato River Delta. I feel in my heart they are probably the last wild lands in the Caribbean.

Turbo is the Southern-most municipality in the Caribbean coast of Colombia, yet poorly known nation- and world-wide. Such invisibility contrasts with the beauty of tall mangroves in wild areas and with the numerous fishermen settled in small villages along a ca. 200km-coastline. In addition, the urban area of Turbo, with nearly 50,000 inhabitants, is sustained by both the services provided by mangroves in the proximity and afar, and most importantly by the small-scale fishery providing over 50 species of fish and shellfish. Turbo is a vibrant small city populated by african-descendants coming from the Pacific (Chocó) region of Colombia, amerindians from the Panamian Darién and the northern Andes, and mestizos from the european arrival. Fishermen and their families by far may account for a 1% of Turbo’s population in both rural and urban area.

Despite the foundation nearly two centuries centuries ago, the urban area has sprawled since the 1970’s as a consequence of peri-urban settlements promoted by migration from rural areas as a consequence of the armed conflict in Colombia (1,2). Such settlements occurred in lowlands, usually in the intertidal fringe, at expense of the native coastal wetlands (1, 2). Therefore, mangroves and freshwater grasslands and forests were decimated in the vicinity of Turbo. In contrasts, these types of wetlands remain as fringes or large patches in the rural areas, and coexist with small fishing villages away from Turbo.

Despite of this landscape mosaic, both urban and rural inhabitants in the coastal plain are subjected to natural hazards such as erosion, sea surges and flash floods, and are therefore vulnerable to climate variability (1). Indeed, in 2010-2011 this area was severely impacted by La Niña-triggered flooding in the coastal plain of Turbo river and numerous villagers, mostly fishermen and peasants were relocated in provisional shelters (3). After one year, they returned to their homes because permanent relocation plans did not translate into reality. Six years have passed by and both fishermen and city administration forgot about such event, particularly because the region experience a very strong and long drought related with El Niño 2014-2016. Nowadays, the return of La Niña is forecasted but little has been improved in terms of adaptation plans to cope with flooding hazard. Moreover, little has been discussed about the longterm consequences of sea level rise in the area, despite most people live between 0 and 2 m above sea level.

It is urgent to conduct high-resolution mapping with humanitarian objectives in this municipality. It is urgent to map flood-prone areas in both urban and rural settings. It is also urgent to map and assess the role of bioshields provided by mangroves and freshwater wetlands. It is also urgent to map mangroves to halt their destruction. Mangroves in the proximity of Turbo to the North (Bahía El Uno) are strongly impacted by illegal logging (4, 5), and although they have not been reduced in area, they stand as thin trees and their roles as bio-barriers, habitat for wildlife, and nursery for fishes could be compromised (6).

In conclusion, mangroves are key ecosystems for the entire Urabá region, and should be boldly placed on open-source maps. Mangroves should be highlighted as cornerstone to support coastal livelihoods by providing goods and services. Ultimately, coastal wetlands are key elements for the resilience of coupled social-ecological systems, and need to be included in adaptation plans to face climatic variability and climate change, particularly sea level rise (7). 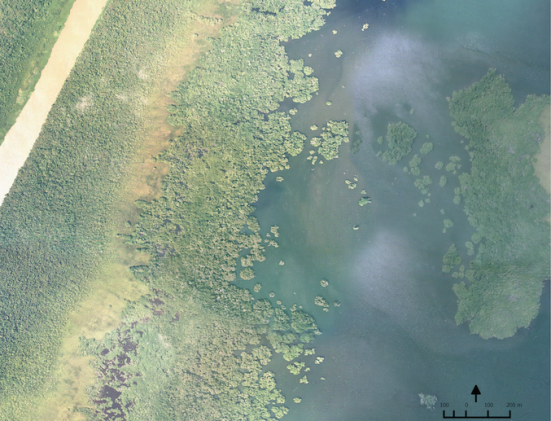 The Caribbean Sea is seen in the imagination of most people as an area of clear waters, paradise islands, and peaceful beaches. In the best of the instances, it is also seen as the land of dwarf mangroves border-lining creeks on coral islands.

However, the Souhtern-most tip of the Caribbean Sea located in Colombia close to the border with Panama is a different story. This location is known in world maps as the Urabá Gulf or the Darién Gulf. It is a U-shape entrance of the sea into South America formed by the clash of the tectonic plates of the Caribbean, Nazca and the Pacific. Such a geological activity gave rise to the Isthmus of Panamá and created a fracture in a North-South direction that formed the main axis of the Urabá Gulf. Therefore, this gulf is surrounded by two main coastal ridges: the Serranía del Darién to the West and the Serranía de Abibe to the East. Both mark the limits of the geological plates, the Isthmus (or Meso America) and South America, respectively.

Such an impressive geological history not only formed a coastline with a distinctive landscape from the rest of the Caribbean in the neighboring areas: Panama and Colombia. It also promoted a major change in the hydrology of an ancient river, the Atrato. Being formed in the upper part of the Western Cordillera of Colombia in the Pacific side of South America, one of the rainiest places on Earth (annual rainfall: >8 meters!), the Atrato river drains a world-class discharge. Such discharge once ran to the Pacific before of the closure of the Panama Isthmus. But nearly 3 million years ago the course of this magnificent river was diverted to the North and ended discharging into the Urabá Gulf, now the Southern-most end of the Caribbean Sea.

The change caused the mangroves to flourish and growth to a point not seen in the Caribbean coast of Panama and Colombia (see photo).

This unique land has been subject of a mapping effort aimed at understanding its biogeographic features and history.

After a decade of scientific exploration, my research group is moving from the fields of coastal ecology, landscape ecology and biogeography, to coastal zone and urban planning, as well as to sustainability of coastal livelihoods.

Mapping human settlements and using open source data has become a priority for us. In the following link the reader and mapper will see the evidence of both the wilderness of the area and the human threats to them:

The rest of the world deserves to know this wilderness heritage. The local livelihoods need the support of volunteers to prevent destruction of this natural areas and better-planning of urban settlement. Open source data seem to me an answer to both tasks.

Today, I commit myself to provide high-resolution data for mapping for humanitarian projects.

Welcome to the Southern Caribbean.