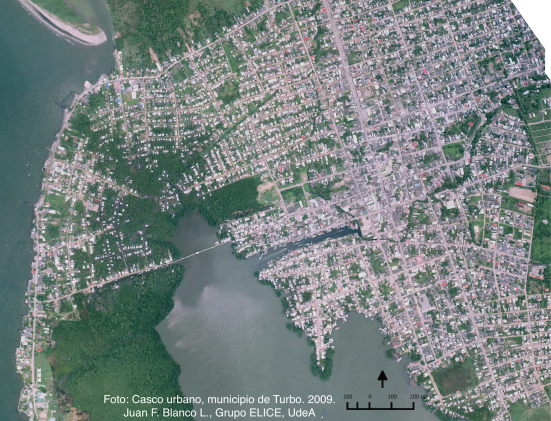 Turbo is the Southern-most municipality in the Caribbean coast of Colombia, yet poorly known nation- and world-wide. Such invisibility contrasts with the beauty of tall mangroves in wild areas and with the numerous fishermen settled in small villages along a ca. 200km-coastline. In addition, the urban area of Turbo, with nearly 50,000 inhabitants, is sustained by both the services provided by mangroves in the proximity and afar, and most importantly by the small-scale fishery providing over 50 species of fish and shellfish. Turbo is a vibrant small city populated by african-descendants coming from the Pacific (Chocó) region of Colombia, amerindians from the Panamian Darién and the northern Andes, and mestizos from the european arrival. Fishermen and their families by far may account for a 1% of Turbo’s population in both rural and urban area.

Despite the foundation nearly two centuries centuries ago, the urban area has sprawled since the 1970’s as a consequence of peri-urban settlements promoted by migration from rural areas as a consequence of the armed conflict in Colombia (1,2). Such settlements occurred in lowlands, usually in the intertidal fringe, at expense of the native coastal wetlands (1, 2). Therefore, mangroves and freshwater grasslands and forests were decimated in the vicinity of Turbo. In contrasts, these types of wetlands remain as fringes or large patches in the rural areas, and coexist with small fishing villages away from Turbo.

Despite of this landscape mosaic, both urban and rural inhabitants in the coastal plain are subjected to natural hazards such as erosion, sea surges and flash floods, and are therefore vulnerable to climate variability (1). Indeed, in 2010-2011 this area was severely impacted by La Niña-triggered flooding in the coastal plain of Turbo river and numerous villagers, mostly fishermen and peasants were relocated in provisional shelters (3). After one year, they returned to their homes because permanent relocation plans did not translate into reality. Six years have passed by and both fishermen and city administration forgot about such event, particularly because the region experience a very strong and long drought related with El Niño 2014-2016. Nowadays, the return of La Niña is forecasted but little has been improved in terms of adaptation plans to cope with flooding hazard. Moreover, little has been discussed about the longterm consequences of sea level rise in the area, despite most people live between 0 and 2 m above sea level.

It is urgent to conduct high-resolution mapping with humanitarian objectives in this municipality. It is urgent to map flood-prone areas in both urban and rural settings. It is also urgent to map and assess the role of bioshields provided by mangroves and freshwater wetlands. It is also urgent to map mangroves to halt their destruction. Mangroves in the proximity of Turbo to the North (Bahía El Uno) are strongly impacted by illegal logging (4, 5), and although they have not been reduced in area, they stand as thin trees and their roles as bio-barriers, habitat for wildlife, and nursery for fishes could be compromised (6).

In conclusion, mangroves are key ecosystems for the entire Urabá region, and should be boldly placed on open-source maps. Mangroves should be highlighted as cornerstone to support coastal livelihoods by providing goods and services. Ultimately, coastal wetlands are key elements for the resilience of coupled social-ecological systems, and need to be included in adaptation plans to face climatic variability and climate change, particularly sea level rise (7).