I am very excited to share that last week our mapping group at Universidad de Antioquia (Colombia) was awarded with one of the HOTOSM Microgrants in its first version.

I was in the field when opened my e-mail inbox, and there it was…an email from the HOTOSM Microgrant Committee informing on the results. Next day, the post was published on their web page:

«We had a fantastic response to our first ever Microgrants Programme, with over 70 applications from nearly 50 countries worldwide. After much deliberation, we’re pleased to announce we are supporting the following projects with Microgrants for 2017 (in no particular order):

…Universidad de Antioquia, Colombia: the Microgrant will enable mapping of coastal wetlands in the Urabá Gulf to help planners and the local fishing community to respond to flooding hazards in the area. The project will map over 190km of coastline, including 2-3km width inland»

I shared the news by phone and email with my colleagues (professors Natalia Da Silveira Arruda, Nixon Aristizabal and Fabio Vélez) from the Geoinformatics Department at my University, the leaders of the «mapping» part of our proposal. They had previous experience with Open Street Maps and HOTOSM mapping initiatives in Colombia, and also became formally involved in YouthMappers in 2016.

Nonetheless, I have been studying the biogeography and coastal landscapes of the Southern-most corner of the Caribbean in the boundary between Panamá and Colombia for a decade. Although I am not a professional cartographer or «mapper», my work has been influenced by both the use of maps and the dialogue with professionals from different disciplines. The first biogeographic expedition to the Urabá Gulf in 2009-2010 was founded on a high-resolution mapping effort (download book here: Expedición Caribe Sur). The input was a 30-cm resolution orto-photographic mosaic for a coast extent of ca. 600 km. Of course, the resulting maps firstly became a way to communicate scientific findings in numerous publications in the fields of ecology, forestry, zoology, geology and oceanography. Then the ortho-photographic mosaic was used as base map for zoning mangroves and drafting the coastal zone management plan in agreement with the Regional Environmental Authority. It was used by regional and urban planners from both the government and the academia…

Unable to disclosure the entire map due to restrictions by the State Government, an strategy to disseminate the geographic knowledge about the coast of Urabá was set on the road with educational exhibitions and popular writings.

More recently, I have partnered with scientists from social, fisheries, aquaculture and nutrition sciences, to support coastal fishing communities scattered along the Urabá Gulf, and more closely at Atrato River Delta and the rural vicinity of Turbo a populated major coastal town. The high-resolution map has become the foundation for every single discussion, cartographic product, meeting and report (see LOPEGU website). 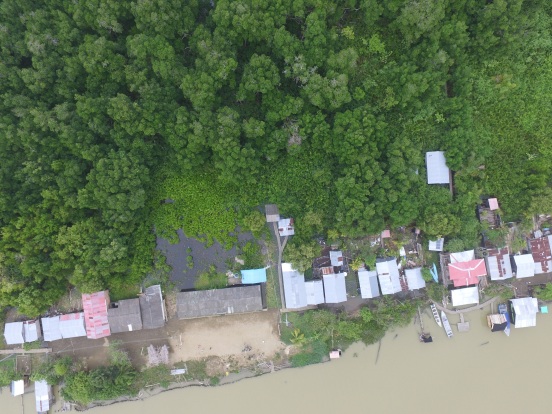 The claim of fellow scientists, managers and people in general was the restricted availability of the high resolution maps, as I always shared printed or pdf files, upon request.

Fishing villages need maps for planning on their territories, locating their fishing grounds, and teaching in their schools. Turbo City administrators need maps for urban and rural planning and for responding to climate-related emergencies such as storm-surges associated with cyclones in the Caribbean and river-overflow triggered by extreme rainfall during La Niña. In 2010-2011 the rural area experienced a humanitarian crisis due to flooding related to such events. But most importantly, human settlements low-laying in the coastal plain need to adapt to sea-level rise.

For that, open-data, ready and easy to use maps are needed.

The 26th July, last year, a teacher from the elementary school in Bocas del Atrato wrote on a wish list that all participants in the Celebration of the International Day of Mangroves placed on a small wood-craved boat that we placed in the waters of the Atrato River as a commitment with mangroves:

«I would like the world knows where Bocas del Atrato is»

I am happy to inform to her and to my friends, fellows, and most importantly, the people along the coast of Urabá that time has come for the Urabá map to go OPEN and Humanitarian.

Thanks HOTOSM, and thanks in advance to voluntary mappers all over the world that will support this humanitarian effort.

Welcome to the wetlands and fishing communities of the Southern Caribbean! 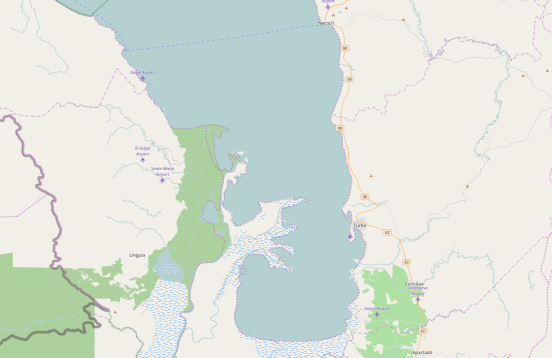